I mentioned it’s cuteness to Jonny, and in return he told me about a story he recently heard on NPR interviewing the family of a crazy guy in China who was arrested for cannibalism. Apparently his parents noticed at a young age that he became obsessed with saying “I’m going to eat you”, and pretending to bite people. That got me thinking about our obsession as a culture with saying things like that about babies. “Oooooh, look at his toes. Don’t you just want to eat them up?” or “Wook at those chubby wittle cheeks! I just want to bite them!”

Now whenever some random old lady stalks me in the produce aisle so she can get a pinch on Charley’s cheeks, I run. Fast.

Then when we’re in the clear I hand him a fresh peach, and encourage him to chomp away. It’s still cute, hell maybe even cuter, to hear him say “I’m gonna eat-choo” to a juicy peach.

And on that note, let’s segue into the goodness that is classic fruit crisp made with perfectly ripened summer blackberries and peaches.

Preheat the oven to 350 degrees. Line a sheet pan with parchment paper and arrange four 7 or 8 oz ramekins on the pan. Set aside.

In a large mixing bowl, combine the peaches, blackberries sugar, lemon juice and vanilla and toss to evenly coat the fruit. Divide the fruit evenly among the four ramekins. 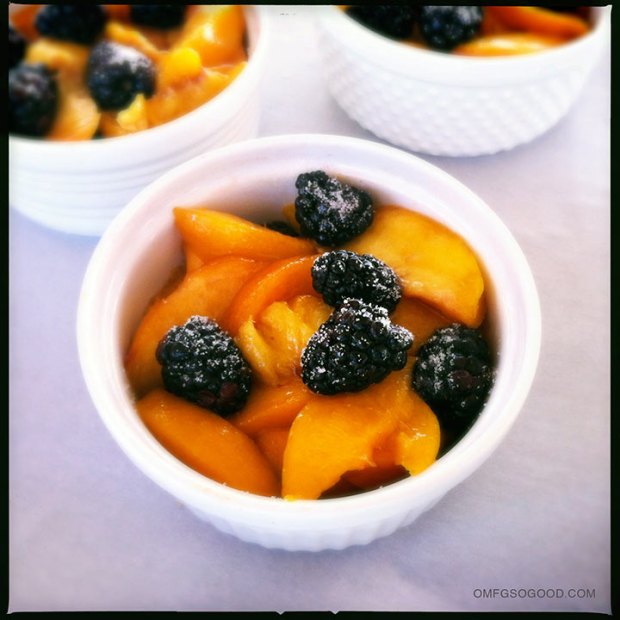 In another small mixing bowl, combine the brown sugar, flour, oats, pecans, salt, cinnamon and nutmeg, then add the cubed butter and work it in with a fork (or your fingers) until a crumbly texture forms.

Sprinkle the crumb topping evenly over the four ramekins to cover the fruit completely, then bake in the preheated oven for 25 – 30 minutes or until the topping is a nice golden brown and the fruit mixture is bubbling.

Allow the crisps to cool in the ramekins on a wire rack for 15 minutes before eating. Serve with fresh whipped cream or vanilla ice cream (And maybe a drizzle of caramel? Um, yes.)