I grew up in the era of the original McDonald’s fried apple pies. They were so frickin’ deliciously hot, sweet, ooey-gooey perfect. Then somebody complained about them being ‘unhealthy’ and the next thing I knew they were selling McDonald’s baked apple pies.

Sigh. Things were never quite the same.

Well not to worry, my 30 year old (and older) friends. I’m bringing back the mini fried pie. And just for good measure, throwing in a nip of bourbon.

Unroll the pie crusts and cut small circles using a 3″ round cookie cutter. collect the dough scraps, re-roll and cut until you’ve used as much of the dough as possible. Arrange in a single layer on a sheet pan and set aside.

In a medium mixing bowl, combine the peaches, brown sugar, cinnamon, nutmeg and lemon juice. Toss to evenly coat the peaches in the sugar and spices.

In a medium saute pan, melt the butter, add the coated peaches and simmer for 5 – 7 minutes or until the peaches start to soften and break down. Remove from heat, add the bourbon and stir to combine. Return to low heat and simmer for another 5 minutes.

Drop 1 tbsp of the peach mixture in the center of each of the unbaked pie crust circles.

Grab both sides of the circles and fold up, then gently pinch to seal in the peaches, creating small half-moon shaped pies.

In a heavy saute pan, heat 1 1/2 – 2″ of canola oil to 350 degrees. Carefully drop the mini pies into the hot oil and cook for 2 – 3 minutes, flipping once to cook both sides evenly, until they’re golden brown and delicious looking. Remove from the oil and transfer to a wire rack set over paper towels (this will allow any excess oil to drop down while air circulates all around the pies, maintaining the crisp deliciousness.

In a large ziplock bag, combine 1/2 cup granulated sugar and 3 tbsp ground cinnamon. Drop the pies (2 – 3 at a time) into the bag and gently shake to evenly coat with cinnamon sugar.

I’m glad Jonny was at a screen-printing demo when I made these, because he would have been shoving them into his piehole as I was cooking, and I would have ended up with one lonely mini pie for myself. I mean, it was hard enough fending off the wee-beasties once they caught the sweet scent.

I couldn’t fault them though, I recall my first fried pie bite like it was yesterday.

And trust me, these were just as good as I remember. Hell, maybe better. 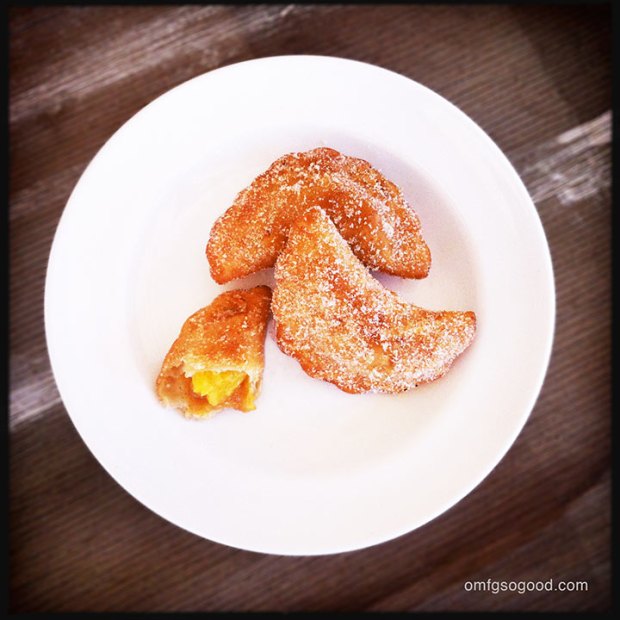 Leave a Reply to That other cook... Cancel reply